I was so excited for Christmas this year! I wanted to start some traditions of our own. I want Lynlee growing up knowing her traditions and what the true meaning of Christmas is all about. We've had our tree up since the weekend after Thanksgiving. I must say, it started out looking pretty but as I look over at it right now the ornaments are only on about 3/4th of the tree. I think it's Lynlees mission daily to see how far she can push me and to see what new thing she can try to reach.

Getting back on topic.. (sorry I'm still trying to regroup from this weekend) I want Lynlee to have three major traditions.
1. I want her to have Christmas jammies every Christmas Eve. This year we did this but her tube leaked so we woke up Christmas morning and had to change her before she opened any presents.
2. We will be letting her open one present on Christmas Eve.
3. No matter what our plans for the day are we will open our presents from Santa here at our house.

Lynlee did well this year,and we really enjoyed her. We started the morning at 7am. I'm not sure who was more excited, Ryan or Lynlee? I'm thinking it was Ryan! By the time Lynlee opened her second present she was pretty much done. She wanted to play with her new things. She would open the others if there was something she wanted to see underneath. If it was a box or clothes then she would just throw it to the side. 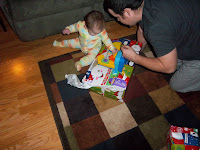 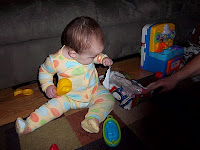 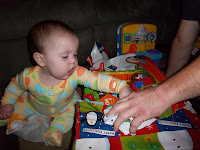 By 9am we were at Ryans parents. Lynlee opened a few and then took a nap. After her nap we pretty much opened the rest for her. There was just to much going in for her to pay that much attention to one thing. Later that evening we to my dads. By 8:30 she was more than tired.

Yesterday morning Lynlee got up and we put her new toys out for her to play with. She literally crawled around them to play with her old ones.

But that's how it goes right?

I hope each of you had a wonderful Christmas filled with lots of love, laughter, and family. The only thing I wanted for Christmas was to be home, not in a hospital. And God granted me that present!!
Posted by Stacy at 9:30 PM