Most days I take or at least I try to take the hand we were dealt pretty well.I know there isn't a line of moms saying they want our life or our worries, but I'm sure some moms that deal with more would want it or at least I tell myself this. I know even though life is hard some days that it's what God has planned.

Today is not a good day for me. In fact I'm pretty bitter with it all today. Lynlee has been more than her normal cranky. I can see her gums are swollen. She just seems needy today. She wants to be carried and held all day. This morning she got her 2nd flu shot which I'm sure doesn't help anything.

And her feeds have been terrible. She's vomited twice today from not wanting to sit still (or so I think?) At her 10am feed Lynlee didn't want to sit in her high chair and play and watch her movie. She wanted to roll around in the floor, which is what every 13 month old wants to do. But instead I have to make her sit still on the floor because all the moving, rolling will lead to either pulling out the tube or throwing up. I feel like I'm punishing Lynlee to make her eat and it's not fun.

Most days we try to make feed time, play time. We play in the floor with her so she doesn't feel like she is being punished. But this morning we were running out of time and I just needed her to sit there for 5 minutes so I could get ready for her appointment. I found myself getting angry with her, and then I got angry with myself. She didn't ask for this. She is a good child and makes the best out of crappy situation she was given. And how could I get angry at her for not wanting to sit her on her butt for an hour.

I'm up for suggestions to make feeding time more enjoyable. I'm anxiously waiting for the day she can walk. We can strap her backpack on her and she can go! But until that day I won't be getting a mother of the year award.
Posted by Stacy at 3:13 PM 4 comments:

I was going to write this real long blog that would tell everything I was thankful for. From my family, friends, love, life, etc... But I decided not too. I'm tired! We had an amazing day and I'm ready for bed, and two it would make me cry. Probably some of you too, so I'll leave it at this..

I've never been so Thankful in my life.. For everything and everyone. God Bless. And Enjoy a few pictures of our day 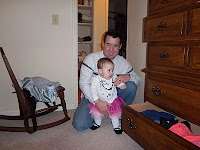 (Daddy shaved, and Lynlee all dressed up for the day :) 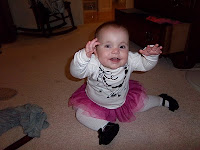 (Mom STOP taking pictures and pick me up already!) 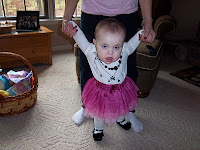 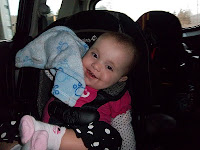 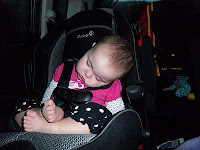 (Whew, all this traveling wears a girl out) 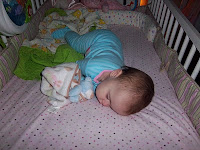 Happy Thanksgiving everyone!! See ya on the flip side
Posted by Stacy at 10:00 PM No comments: 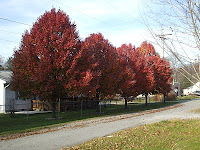 When you look at the photo of the trees some of you might be thinking "Wow, those are pretty." Other's might be thinking, "yeah that's a picture of leaves, who cares." The list can go on and on.

That picture means the world to me! It's a picture of home. A picture of the trees in our yard. A picture that I got to take this year.

Around this time last year, I was sitting in a hospital room. Lynlee's central line had already got E-Coli and we knew we would be there another 14 days. We wouldn't be home by Thanksgiving, and I was home sick! I remember the day like it was yesterday. I was sitting in the rocking chair rocking Lynlee when I got a text. It was from my sister Kristie. I was so excited to hear from her, I missed her so much. I opened up the text and it was a picture almost exactly like the above. Our trees were so beautiful, and I wanted to be there! I took one look at the picture and just sat there and sobbed. Ryan ran over to me to see what was wrong. All I can say is I want to go home!

I've been waiting a year to take that picture! It's times and moments like these that really are priceless. This weekend was amazing. We spent a lot of time being outside, being a family, and most importantly we were home!
Posted by Stacy at 11:00 AM 2 comments: 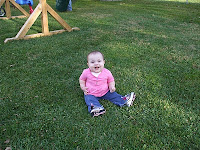 Lynlee and I have spent the last two afternoons outside. I have to say we are REALLY enjoying the 70 degree weather, and neither one of us is ready for the dreaded winter to come.

Yesterday Lynlee and I drove downtown, parked the car, and did all our errands on foot. Lynlee laid back in her stroller and enjoyed every minute of it.

Today we also did Lynlee's afternoon feed in the stroller, but she got to enjoy lots of her own outside time. She enjoys just sitting on the ground pulling grass and playing with a few leaves. 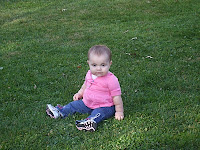 The main reason we are outside so much is we know it's not going to last forever, in fact all next week is calling for 50's. Yuck. But also, Lynlee seems to be at a very high maintenance stage of her life. She wants to be moving at all times. She want to walk by holding your finger tips or she wants you to walk and sit on your hip. Both of which are extremely exhausting. She is showing her new attitude when you don't do what she wants. Mostly she will sit on the floor with her hands in the air and scream until you pick her up. Where did my sweet little girl go?

I'm hoping she is walking soon. I might be retracting that sentence soon though. If you stand Lynlee up with the couch against her back she will take 1 or 2 steps to you! By far the best thing I've seen yet.

If mother nature would bless us with more warm weather I would be more than humbled, however if not please feel free to stop by, visit and take your turn walking.

Love to all, and lots of warm thoughts!
Posted by Stacy at 4:01 PM No comments:

I've been wanting to blog about this since Tuesday, but I've been putting it off. I actually thought about not blogging in general. I know it will make me angry. I figure what better day to do it then Friday. Who can stay angry on a Friday.

Two weeks ago we took Lynlee for her scheduled ammonia draw. I nearly threw up when they told me it was 119. We rushed her back in for a redraw and I called Pittsburgh while we waited. The second draw came back at 79. Ugh.. So we done a redraw 48 hours later (on her birthday) and it came at 101. I called Pittsburgh and they said to drive her up to do some labs. Her ammonia came back at 58 and after a few hours in the ER we were released to come home. They wanted a redraw on Friday to make sure everything had stabilized. First draw 131, second draw 62. I called Pittsburgh again and they told me that this is impossible. The body can not fluctuate this much.

So frustrating. What was going on?

So I got online. I started emailing some moms that have hopefully been down this road, emailed the president of NUCDF. Let me tell you, I've learned more from these women than any MD. So after a few emails and answering some questions I figured out something was missing at her draws this week. They weren't flushing it with saline when they accessed her port. So I did some research, made a few phone calls, they made some phone calls, etc..

On Monday I got on the phone with our team at Pittsburgh and told them what I thought was going on. They agreed this could be the problem and I asked to not get Lynlee checked this week. She had just been through so much and was starting to cry when she walked into the hospital! They okayed it.

So this Tuesday we went to have her ammonia checked again. I watched to make sure the saline was used, to make sure there was enough waste, and that the blood was put on ice instantly...

I was happy, but instantly pissed off. Because of one simple little thing (that now I have to watch to make sure they are doing there job) Lynlee had a terrible week. 7 needles to her port, and one long trip to Pittsburgh on her birthday. And it's not just there, we have to watch them even at Pittsburgh. They are especially bad at not putting in on ice instantly. I've made more than one nurse mad, but I'm okay with that.

I feel like when this is all said and done I'm going to make a lot of people made, but I'll be the best nurse for my daughter!
Posted by Stacy at 10:25 AM 2 comments: