Lynlee had her scheduled appointment at Children's Yesterday. In general, I was not looking forward to it. If felt like we had just got home from there, and our first appointment wasn't even until 2pm.

We got there early to get her blood work done then headed to her G-Tube appointment. She does need a bigger G-Tube since she has grown so much. They didn't have them in stock so they are just mailing it to me this week. This will be my first time switching it out at home. I've done it once in the hospital.

Our second appointment in the day was Genetics. Lynlee's ammonia was 35 yesterday. I was so pleased with that!! They are extremely happy with Lynlee, her levels, and her development. They should be calling probably tomorrow with any formula change they might make. The doctor also said he would see us in 3 months.. My exact words were, Umm NO!! He then laughed and said how about 2? That will work since we went almost 7 weeks this time. I know the longer apart the appointment are the more in control they think she is, but I'm still so afraid she will get a growth spurt or something. We are going to do every other week ammonia's, and continue to do weekly weights.

We are heading to the beach next week for Lynlee's first vacation. I've been on line and found the closest hospitals and know where to go if something would happen. I also called the hospital to make sure they can check ammonia, etc.

So if nothing exciting happens this week I'll blog when we get back from the beach and post lots of pictures :)
Posted by Stacy at 10:03 PM No comments: Links to this post

Lynlee's Ride for a Cure for Cycle!

We ride for Lynlee! Why? Because she is amazing. She is strong, smart, and beautiful! She is a fighter!

In the 11 short months Lynlee has been here with us she has went through 4 surgery's. That is 4 too many to us. She has been inhabited 6 times in the past 11 months. 4 of those times were for the surgery.

We ride for a cure because we have faith there will be a cure!

We ride for your future children. A UCD child is born everyday! The next one could be yours!

We ride for AWARENESS!! The best hospital (or some say) in our state didn't know what was wrong with Lynlee!

We are asking you to ride with us! Not to be pushy, but we would ride for you and your children!

If anyone has $10 extra dollars, $5 extra or just a few dollars it would be appreciated.

Join our team!! Help us find a cure!

http://curethecycle.dojiggy.com/lynleesteam
Posted by Stacy at 2:41 PM No comments: Links to this post

Yesterday Lynlee had her dye study done on her port. We thought it would be quick and simple. I had prepared myself that the port had probably became loose and that she would have to come back for surgery. I try to prepare myself for the worse so if it doesn't happen then I'm okay.

Well our day went a little something like this. By 1:10pm Lynlee was taken away to do the dye study. They told me it would take them 30 minutes at the latest and they would come get us to see her. As she walked down the hallway with them, she was talking away. However, I walked the opposite way with big tears in my eyes. I wanted to go with her. I was afraid she would be scared during the procedure.

About 25-30 minutes went by and the Nurse Practitioner had came out. She said that she Lynlee's port had "malfunctioned" and the catheter was just floating around in her body. That they had to do emergency surgery NOW before any damage was done. I was really in shock. I hadn't prepared myself for this kind of worse. Everything after that happened so fast. The surgeon came out talked about the procedure, I was very adamant about the fact that another port HAD to be put back in. I also had to make sure they had called genetics (which they hadn't) because Lynlee's disorder prevents us from just having day surgery.

By 2:15 Lynlee was already in surgery. She had ate at 10am, but they thought that had given her enough time and they were not taking any chances of the catheter moving. She was in surgery for around 3 hours. They had to "fish" out the catheter which they said was the hardest part, then put the new port in. She was out of surgery by 5:30, and by 6:15pm we had her on her feeds. She was in recovery and most patients were trying to wake up. Not Lynlee she was awake, and hungry, and wanted up.

Shortly after that we were taken to our room. At 8pm they were taking an ammonia. I had again prepared myself that the level might be a little elevated. After all, she had been without her feed including meds for 8 hours, and had just gone through a 3 hour surgery. The level came back at 27. I was thrilled. I knew everything was going to be okay after that point. Her midnight ammonia was 34, and her 4am was 22.. Whew such a relief.

Lynlee was amazing through it all. From the time she left recovery she was up and ready to go until 10:30 last night. She wanted out of her bed, she wanted to play. I've never seen anything like it!

We did find out afterward that they were sending Lynlee's old port back to the company to see if they could research and see why it had came apart.

We came home this afternoon and Lynlee is doing wonderful. She had a nasty cold that is going around and that is our biggest issue at the moment, not the fact that she just had surgery. You wouldn't even know it. She is still rolling down the hallway like always.

Thank you to everyone that prayed for us, that kept us in your thoughts. I don't know how we could make it without our friends and family!
Posted by Stacy at 9:41 PM 2 comments: Links to this post 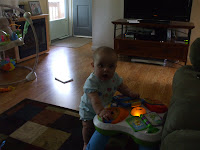 Well since my last blog Lynlee is doing all kinds of new things. She now waves Bye-Bye, Gives High Fives, and will give you kisses when you ask (by far my favorite!)

Every day I think I love her a little bit more if that's even possible.

Yesterday she was playing in her bedroom floor when I turned around and she had pulled herself up to her toy box. I was so excited!!

Ammonia wise, Lynlee has been fantastic! Last Monday it was 24! So amazing :)

And or course with all of this good news I have some bad... It's seems Lynlee's medi-port is having problems. For the past two weeks it hasn't been drawing back blood. Last week I had taken her to the cancer center to get it flushed, and when they started pushing the saline in she started screaming in pain. They stopped immediately and said they were uncomfortable doing anymore. I've learned that sometimes when the line has came out of the vein, or had a whole in it can burn. However, we are praying it's just a clot and the pressure of it was hurting.
We go to Pittsburgh tomorrow to do a dye study test. They say the test is really simple. They will just put dye in her port, and follow it to see where it goes.

So after tomorrow they will be doing one of two things: 1. Putting medicine in, to be unclot the port or 2. doing surgery to put in another port.

I'm hoping, praying that it's the first one.. I know no matter what the outcome is, we will be fine. Lynlee will be fine! God will get us over this bump in the road once again.
Posted by Stacy at 9:53 PM 1 comment: Links to this post