Somehow days slipped by and it's Friday. I haven't blogged in over a week. No wordless Wednesday, no nothing. And as I look back I have no good excuse.

The good thing you haven't really missed much. There isn't or hasn't been a lot going on. We were one of the lucky ones that were only out of power over the weekend for less than 36 hours. My grandma and my mom on the other hand is still out from last Fridays storm.  I was worried Lynlee would be scared of the dark or whatever but it didn't bother her in the slightest. She ran room to room in the dark. Played with her flashlight and life went on. We did miss her music box at night. So bad that the second night Ryan would up every couple hours just to put gas in the generator so she could sleep.

We did go back for labs this week. Lynlee's prograf was a little higher than they wanted it last week. They made some dosage changes. The plan is for another level next week but we are still waiting on the results from this week.

A holiday in the middle of the week has messed everything up including me. I have no idea what day it is. Our 4th was pretty low key. Ryan had to work until noon. We had some family down for a cookout and that was about it. In case you don't have facebook here's Lynlee on  the 4th. 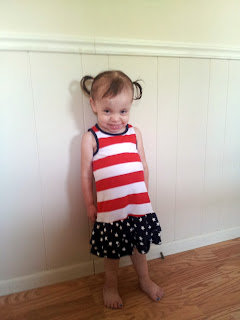 I'm resisting the urge to do last 4ths and show you how much she's grown. I'm sure everyone gets tired of that. But what the heck.... 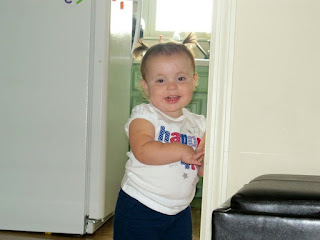 She cracks me up. She's getting more and more of a personality every single day. Her temper is showing. Her stubbornness. She acts so much like me that it's scary. She's so independent.

This is her picking out her snack... 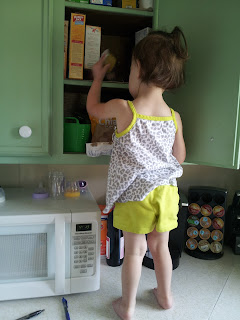 Over the past few days she's been an eating machine. She looks like she's finally gaining some weight. We've been trying. Adding oil and fat to everything. It's kinda gross actually. 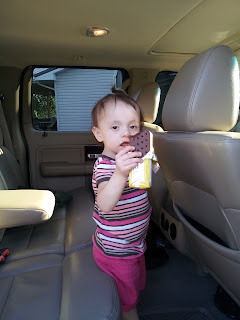 And when in doubt give her ice cream. This was actually her purchase from the ice cream truck.

Well I think that's all for now. I feel like I need to be productive. Have a great day/weekend/ next week. Just kidding I'll be back before then! Hopefully :)
Posted by Stacy at 10:11 AM