Last Tuesday Lynlee had her ultrasound. We drove 6 hours total for a 20minute procedure. It was a long day with a little shopping and some awesome food :) The results showed everything was clear which stumped the doctors. They were sure it would show something. They wanted to get labs today and do an MRI of her bile ducts early next week just to make sure there isn't something hiding in there. 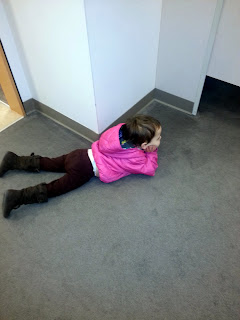 
Last week Ryan and I both came down with a terrible cold. No joke, I don't remember the last time I felt that bad. Ryan called off from work one night and I was in bed every night by 10. We are still pretty stopped up but feeling much better... 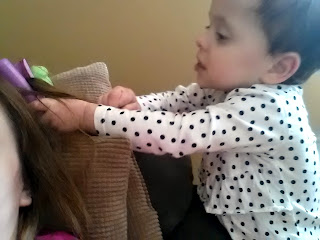 (When mommas sick on the couch Lynlee does hair)

So of course Lynlee comes down with it. Her nose started running over the weekend and she hasn't been sleeping well.. She had labs today and they were about the same. Still high. They can't sedate her with a cold so they decided to get labs in two more weeks and we will go from there. We are going to reschedule the procedure but that doesn't mean she will have to have it. Basically we are praying for perfect numbers in two weeks..

Speaking of praying,Ryan and I went to church for the first time in a long time yesterday. Our Godson got baptized and we were honored to be apart of it. I feel like with Lynlee's medical stuff and some personal stuff going on we have a lot on our plate. The sermon the preacher gave really spoke to us. And I left there feeling so much better. I'm not one to preach or push religion,but it's awesome how God knew we needed that.

I think other than all of that things are the same. No real update... I've been working some, finally have some of my own clients. I can't tell you how thankful I am for a job that it doesn't matter that I need days off to take of Lynlee.. And other than the cold Lynlee is awesome. She's still going to school a few days a week and having her speech therapy. She's making some progress, I'm so proud of her. 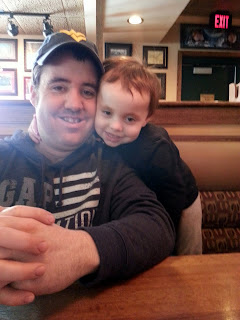