Oh Where, Oh Where 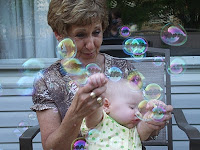 Have I been? Well to say the least life's been crazy busy. Not metabolic wise, Lynlee's been great. I hope I've never writing to you about high ammonia again, but I do know that's wishful thinking. However, I am doing better on not dwelling on it. We are "Living" more! Today was a monumental day. It was the first Monday in 15 weeks that I didn't drive to Weston. I did not get Lynlee's ammonia checked this week.. Yes, I repeat. I. DID. NOT. GET. LYNLEE'S. AMMONIA. CHECKED!! Shocked? Yea so am I, a little. I know we can't get it tested every week for the rest of her life and honestly I didn't even question my decision today. I know she is okay.

Last week was busy! Lynlee and I went to Weston (all by ourselves) for the ammonia check. I have only went by myself one other time. I'm spoiled like that, but it's hard work by myself. Before we were 10 minutes from the house she had gagged herself with her little fingers (yes, we are teething) and was throwing up in the back seat. I had to pull over. Not even 5 minutes later she had pulled all her toys off and was throwing a tantrum, so I pulled over again. The ammonia was 41, so we headed home. 10 minutes after we started home she pooped all of her outfit so we were changing clothes in the Sheetz parking lot, and I forgot her milk. This is why I don't go by myself.

Last week we also had Development, Occupational Therapy, and Speech Therapy. In general, she is doing well. Still delayed in the fact that she doesn't bare a lot of weight on her legs, and isn't pushing up all the way, or crawling or rolling over to her left side. I don't know about anyone else but I hate the word delayed! It's my natural instinct as her mom to take up for her. That she isn't pushing up because they have her calories up and she is 20lbs 14oz, that she will just do it when she is reading, and the list can go on and on. But to some she will be delayed..

Two days after they left Lynlee was pushing up (all the way up) with her arms, and on the third day she was rolling on to her left side. I don't think she likes the word delayed either!!!

This weekend Lynlee had her first time in the swimming pool. I knew she would either love it or hate it. Lucky for us she LOVED it. She would kick, and splash. My favorite part had to be when she would get so excited that she would pull my face and give me huge baby kisses. I'm not really sure if that's what she's doing, but that's what I'm saying! Regardless, there are few things better in life that slobbery baby kisses! 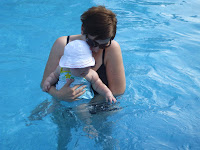 It seems that Lynlee has gave up her evening nap. So now if I'm lucky I get 3 30 minute naps for her a day. However, I'm going to try to blog at least twice a week. I don't like the fact that it's been 2 weeks, and now I'm trying to put all these events in one long blog instead of doing a few short ones and elaborating a little bit more.
Posted by Stacy at 9:10 PM