It feels good to help!

I don't blog about the G-Tube much. I don't really talk about it on and day to day basis unless I'm telling Lynlee "No-No" to stop pulling it. I looked on Facebook and I've never posted a picture of it. In fact, I only have one picture of it. Why? Well one it's always covered! Unless we are traveling, getting ammonia or getting a weight check she is always in a onsie!

Another reason I don't take pictures of it is because it's just normal for me. It's something we've almost always known. I don't really know what do to do with "normal" babies without G-tubes. I don't know how to really feed them or burp them or what to do when they are gassy? Lynlee has never drank more than 50cc's (1 1/2 oz) of milk from a bottle. 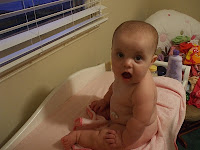 (I've never posted this picture because it doesn't look like anyone is standing behind her. Ryan took the picture and I was behind her, so don't turn us in to child services!)

So when Pittsburgh called me yesterday to talk to a family about living with a G-Tube I jumped on it. I wish I had a family to talk to before we had made the decision. In fact, if we would have made the decision sooner we would have probably been home 2 weeks sooner. I called the mom as soon as I hung up the phone with Pittsburgh. I was excited about helping. I've been "helped" so much along the way from other mothers with Lynlee's disorder and I hope I can be help to someone too.

As I listened to this mom talk about how she feels like she is forcing her child to eat, how she felt she was letting her child down by not being able to feed them, and the one that hit home... How can you put your child through something to make your life easier. It felt selfish! I remember feeling all of those things, but at the end of the day Lynlee HAS to get all her formula and her meds or she will be REALLY sick. The decision made sense to us

I hope that the information I have about the G-Tube both positive and negative helps this mother make the right decision. I wanted to let her know that a G-tube is not the end of the world. It was the beginning for us. ( I stole that last line from my dad!)
Posted by Stacy at 3:18 PM