Lynlee had her birth to three yearly evaluation last week. I have to say it wasn't as bad as I thought it might be. And as thankful that I am for what it was there was a part of me that will always be hoping we don't need it anymore.

No parent wants to hear that their child is delayed. i could go on and on about that statement but I won't because this time last year we wasn't sure how delayed she would be. We were never promised anything with Lynlee. We still don't know what damage that high ammonia in the very beginning did.

Lynlee has a 25% motor delay and a 40% speech delay. That's it. And I say that's it because I'm pleased with that. I know her speech will come. I mean she is my child, how can she not talk?? And her motor delay. She will get that too. She has came so far in the past two weeks. This time two weeks ago she was barely cruising around the furniture and this picture was taken this morning: 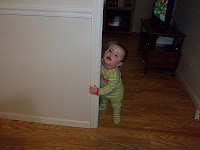 Aren't those jammies the cutest thing you've ever seen?

Anyways, back on track. Her cognitive and receptive skills were right on track and in some places advanced. And I'm not sure if it's right or not but that is the most important to me. The fact that she can and is learning.

This very morning she was fussy, it was nap time, I looked down at her and she signed please. I asked her what she wanted and she pointed at the rocking chair. She wanted me to rock her to sleep.. And the fact that she will point at her books and open the first page and throw the book to the side and point again until we find the exact book she wants!! These are the things that matter the most to me.

For all of you wondering what's going on with the levels. Well we are kinda at a stand still right now. Her 36 threw everything off, which is a good thing, I think? So we will get a repeat probably next week unless they say they want it earlier and go from there.
Posted by Stacy at 11:20 AM