I almost blogged last night at 2am, but I figured as tired as I was I wouldn't make any sense. Maybe I should have because I'm twice as tired tonight. I'd be lying if I'd say it hasn't been a rough, hard, emotional 48 hours at this point. I'll start at the beginning.

Thursday night at 11:15 we get our first call. Saying the surgeon said to call and to be on stand by. I thought I had prepared myself for that call. Let me just tell you that nothing prepares you for that call. I was so scared I was shaking. My legs were shaking, my voice was quivering. I remember setting in bed looking at Ryan and saying I don't know if I'm ready for this. We called a few family members gave them the heads up and I got my self under control. I pulled out my list and started packing. Probably 30 minutes later went by and the phone rang again. They wanted us in Pittsburgh at 10am Friday morning. By the time we made all the phone calls and continued packing it was 1:30. I think I slept an hour that night.

We get to Pittsburgh a little before 10, get admitted and go up to the room. The surgeon was heading out at 2pm to look at the liver. I know some of you liver moms will laugh but I hadn't prepared myself for the wait. I thought we were going to walk in the door say goodbye to Lynlee and she would be rushed to surgery. HA! Oh how I wish that would have happened. The waiting was awful. They did all her labs, started her on fluids and we walked the halls. Her mediport came out twice during the day and we had to re access. She took two 20 minute power naps all day long and was out of control. We were told that we would know something by 3 at the latest. At 3:30 we were told they were late going in. The donor family was having a very hard time letting go. God Bless their souls!!!!

I'll save you the long gory details of a crying child, anxious parents etc and give you something to smile about. We got down to the OR at 6:15ish.. Lynlee was wired for sound and was her usual self. She's a charmer. She had all the OR nurses dancing with her, playing and getting all the attention she could handle. Her's a few pics of her in the act.. 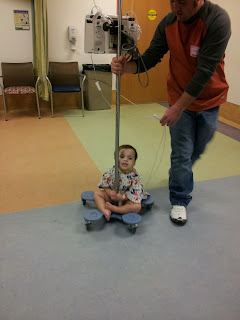 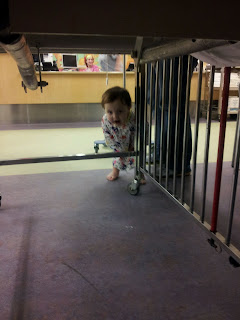 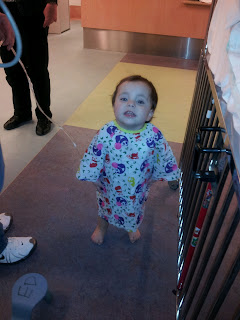 She went into surgery around 8pm. We were given updates all thru the night. Around 12:15ish the new liver was in. By 5am she was out of surgery. She did amazing. We had expected them to leave her stomach open but the liver was such a perfect fit that they could close it. Wow, what a blessing. Ryan and I got into see her around 6am. As soon as she heard our voice she was fighting her breathing tube. By 7:30 she had reached out and grabbed my hand! Sigh.... And by 9:30 she was breathing on her own.

We thought it would take us days to get to where we are within hours. What a blessing from God. I worry, because I'm her mom and that's what I do, but I don't want this is to be too fast. I want her to rest. I know Lynlee and she doesn't ever rest. She has one speed and it's fast!! She is fighting so hard. She is saying momma and dada, answering yes or no questions and even tried to roll over. REALLY???

I'm trying not to get soo excited because I know the road ahead of us can be long and bumpy.. But I'm happy we are off to a great smooth start. Her liver numbers are coming down nicely.

Here's a nice little picture of her. 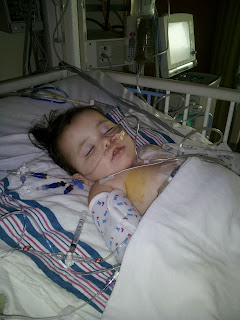 I know there is sooo much more to tell you and to fill you in on but I'm drawing a blank.

We are so blessed. Thank each of you that have said prayers. God is good!! Thank you for loving, caring and supporting us.

I'm honestly too tired to reread what I wrote so good luck. Hope you understood it. I'm off for some sleep. I'll try to update my blog as much as possible. So keep checking back in for updates﻿