It was another busy week last week. We have almost all our shopping done except two presents. I'm hoping to get both of them this weekend so next week I can stay out of Wal-Mart next week. And all of the presents we do have are wrapped. :) 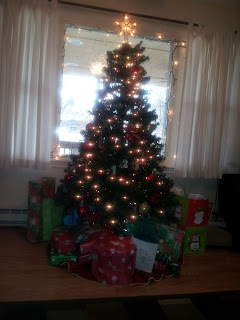 Speaking of Christmas, we gave Lynlee her slippers that came in the mail the other day. I didn't think she would wear them, but she loves them. She even has them on as she naps right now. 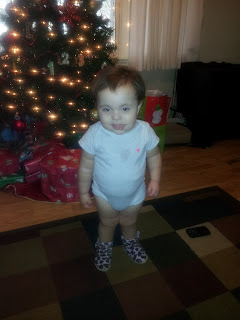 I'm so glad we decided to "act" like we would be home for Christmas. I think it's made the waiting easier. I know they could call anytime but now I'm kinda hoping we make it through Christmas. If we don't then we don't and there is nothing we can do about it, but I have a feeling we will..

We had Lynlee's ammonia checked this week after a small scare. Honestly, I was the only one that was nervous with her actions, but it was time for a check anyways. Monday night she woke up at 2am and was up until 5:30am. After I finally got her back to sleep I had a hard time waking her at 11am. The child is always up by 9. I decided her actions were too off for her so we packed up our stuff and headed to Weston. The ammonia was 69. Higher than before but  was right before her feed which had her meds in it, so it would be lower within the hour.

We met our new speech therapist last week. I liked her! Really liked her! I'm excited for a new start with new ideas.

Construction is coming along.. This is the picture I now see when looking out the window! Much better than before even if we aren't there yet. 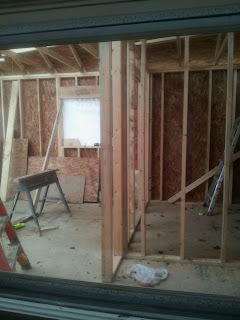