I'm not found of going to the ER. I'm not sure anyone really is but usually when you walk in there with a 3 year old and tell them they have had a liver transplant and/or genetic disorder everyone FREAKS out.. Seriously it is so hard getting Lynlee treated as a normal child. Don't get me wrong there are times I don't want her to be treated as normal. I WANT to be that priority because of medical reasons but more times than not I want them to treat her as they would any other child that walks in the door with those symptoms..

Our pediatrician is awesome at knowing the difference... Most ERs (actually the correct term is ED now) is not.

So when I called our pediatrician last night and she told me yes we really had to go I wasn't excited. But I knew Lynlee needed treated before morning. When I took her diaper off to get into the tub there was blood in it. We've been down that road before. Last time I was panicked this time a part of me was almost relieved. I knew she had a urinary tract infection.

I had been watching for days for her to be sick. She's been so off for days. Been mean really mean to other kids and just irritable. She had a friend come over on Sunday to bring her present, they were playing in her room and he came out with scratches on his face was bleeding!! Yes, it was bad. Tuesday at school she pulled kids hair.. and not just pulled but pulled it out.. I was mortified. Getting out the door was horrible. One morning we both sobbed...

I hoping, well more like praying, this was all related.. That she is just not herself because she wasn't feeling well.. I guess I'll get back to you next week on that. 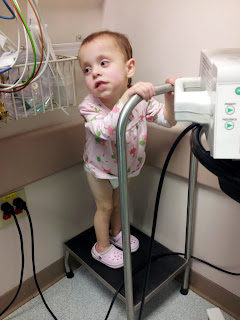 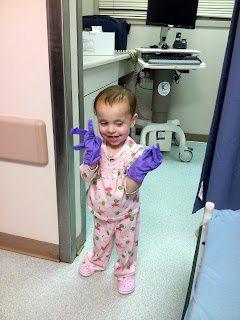 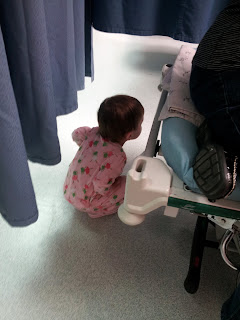 she was totally peeking at the people beside us. haha
But regardless the ER, ED. whatever trip was great. The wait was long but the doctor was great. She didn't freak out. No extra test were ran. We were treated like any other child that walked in off the street..  And Lynlee was a jewel. She didn't nap yesterday and was playing and entertaining herself until midnight...

Not that I hope this happens again anytime soon but this time wasn't sooo bad..
Posted by Stacy at 5:35 PM