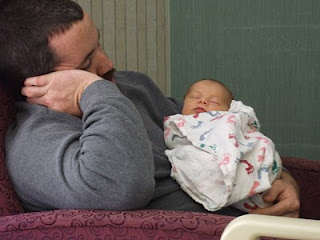 The next two days after Lynlee's birth were a blur. I remember getting very little sleep, having lots of visitors and wanting more than anything to take my little girl home. I hated the hospital bed, and couldn't wait to get home and get into a routine!
Thursday had finally came we could go home. It was all so soon. We had a really rough night Wednesday night. Lynlee was so cranky. The only way she would sleep is if we held her on our chest. Around 11pm or midnight she ate and that was it. The nurse came in around 3am and took her for her hearing test. I told them she wasn't eating well. They said give her time. The doctor came in at 7am. I again told them she hasn't ate. They thought the night nurse had gave Lynlee a bottle and was having trouble wanting to latch on. To keep trying.
We were discharged and ready to go, but Lynlee had to eat one more time. Finally around noon I picked her up again to try to make her eat and noticed she was having trouble breathing! We called the nurse in immediately. They took her to have the doctor look at her. Around an hour later the doctor came back in. Lynlee was fading fast and they were life flighting her to Ruby. I remember just sobbing. Ryan holding me up in the bed! How was this happening??
The flight team and came in for us to sign paper work and told us they thought she had either a viral infection or meningitis. They put her in the incubator and we kissed her goodbye.

We got out to our car and chased the helicopter. It all had to get better.