I rarely have bad days anymore! We have so much to be thankful! So every time I feel myself getting into that slump and having a bad day I make myself feel guilty.

Crazy huh? That I won't even allow myself a bad day?

(Seriously, how could I have a bad day when I wake up to this EVERYDAY???)

However, I don't feel like I deserve to have a bad day! What could be so bad setting at home that I can't pull myself together and put a smile on face. A bad day to me would pretty much be a pity party. And believe me, I could really throw myself one of those and did a lot while we were in the hospital! What would a pity party accomplish? I'd be miserable, Lynlee would probably be miserable, and I'd make everyone around me that way. I could dwell that we've been dealt a bad hand, that none of this was supposed to be like this, etc.. But I won't and I don't!

It wouldn't change anything, and at the end of the day I've learned to accept it, and live life!! We can't live in fear, but we can't be naive about the situation either! 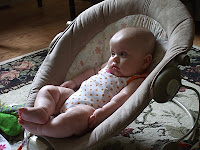 But Monday, Monday was a bad day and for what reason I'm not even sure of. I was feeling blah as soon as Lynlee woke me at 7am. Two cups of coffee didn't help! (And I'm a one cup a day girl!) I went to get on facebook and my status wouldn't change. And when did I start letting facebook determine my mood? But I did.. And then our water was shut off. I guess the neighborhood had a leak so we were without water. UGH! Oh, and my phone wasn't working correctly! I know I was being over dramatic with how bad my day was (and believe me I've had a lot worse), but I just couldn't shake my mood!

We took Lynlee to get her ammonia tested and it came back 47. I even felt myself thinking Ugh a 47. And believe me a 47 is great! But the past weeks we've had 20's and 30's (which is where I like it!) but a 47 is still good! We've left Pittsburgh on 65's and thought it was the best thing in the world so what is wrong with me today?!

Then later on that night I was tired of feeling blah! I got up and walked 2 miles, and thought "enough is enough" Lynlee is home and this is week 9 of low ammonia! Somehow we've managed to where I can stay at home with her because before all of this me not working was never in the plan. Mentally or Financially for that matter, but everyday we make it work! Life can be a lot worse. So if my camera on my phone never works, if I can never post another status on facebook I will survive!
Posted by Stacy at 3:07 PM