Well it's a very lazy, rainy Sunday afternoon here. Ryan's off to deer camp and Lynlee's nappin. I thought I'd catch up on some blogging while I watch the Friends Marathon! I don't get the remote to myself very often. By the time Lynlee gets finished watching Barney then Ryan watches whatever.

Speaking of Ryan, him and I are still on our healthy kick. He's doing so much better than I thought he would. We weighed in for the first time last Friday. He was down 1.5 pounds while I kicked his butt losing 5 pounds. I do think I'm trying harder than him. He's just eating healthy because he doesn't have much of a choice.. Well that's what I thought. Friday when we weighed in he was down 3 and I pulled 2. I'm seriously beyond excited for both of us. It's nice to have someone work with you instead of eating ice cream in front of you at 10pm :)

I'm not looking forward to weigh in this week. I mean with Thanksgiving (and us eating two huge meals that day) plus this week. Well, I can't imagine it being good. I saw what he took to camp :) HAHA.. And well this morning I was craving a peanut butter pie (thanks a lot Heather!) so I made this. 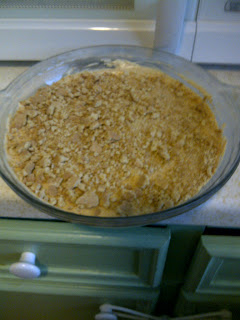 It's low fat and only has 159 cals a slice.. I'm not sure if that really matters if I end up eating the whole thing! HA!

Last night, Ryan and I went on a date night. It was the first time we've been out for months. Very needed and very nice. We headed to CJ Maggies for some dinner and then went to watch Breaking Dawn. Have you seen it? It was my favorite one of the series! I loved every minute of it!

Well enough of the mindless chatter. I could go on and on for hours probably. Just a chatty day for me!

Enjoy your Sunday!
Posted by Stacy at 1:11 PM