I thought when Ryan left today it would be easier than it was last week. I mean we've been through it before, but I was wrong. It was probably hardier. Actually I know it was harder. I think it was because last week I had his mom here. This week no one. I didn't have to pull it together for anyone. So 30 minutes later of me still feeling sorry for myself (that's okay every now and then, right?) I knew I had to pull it together! And I did.  I'm not going to lie, I hate it here by myself. I think it's mainly because I've never been by myself. I moved from living in my house my whole life to  moving in with Ryan. I never had a period to live all alone like most people.

But that's over with. I could whine about this all day (and I might be complaining again tomorrow) but it's all said and done. Lynlee is napping now and when she wakes up we have a date in the playroom followed by washing some towels. We have an exciting life! HA!

I'm still waiting on my phone call from our coordinator with all the details but clinic went well. They stopped two of her medicines (yay!) and we don't go back until next Monday. She did lose 2 pounds over the past two weeks. Most of it was the TPN and the fact when she did go back to her feeds she went to 1/2 calories. And to be honest she had a few pounds to shred. She doesn't NEED all those extra calories now like she did before transplant.

I asked when we could go home, and the response I got was when she can maintain her weight at a full feed. We will be at a full feed Wednesday, and I'm hoping she maintains weight this week. Do you think they'd notice a full diaper and a snowsuit and boots and the next clinic appt for the weight? HAHA. I am getting anxious to go home. It's hard to sit here when they are doing nothing that we can't do there. I do 100 times better in a hospital when I feel like we need to be there not just hanging out. But we will make it.. However, next Monday if all looks good I'm going to be annoying them a lot more!

She did have an ultra sound this afternoon. It went so much better than I had expected. Our favorite tech did it. It's sad we have a favorite tech! But we do. He's awesome and Lynlee always does better for him. I'm hoping to get the results of that when they call about her labs. I can see her labs on line and I already know how everything looks. Her prograf level is a little low, and her potassium is a little high. So I'm waiting for changes on that?

Oh and speaking of skinny minny.. here she is.... 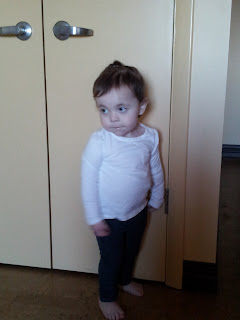 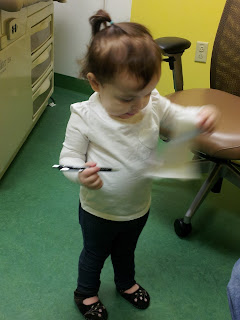 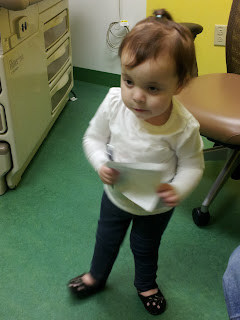