It has been a long, draining emotional day. I'll be glad to start fresh tomorrow.

As soon as we got up at 7:30am Lynlee slipped on the floor and fell. She has a huge bruise on her face. Don't worry you'll see it.. You can't miss it on the pictures we've took today.

Then we got to the lab. I don't even dread it. I mean Lynlee has a Picc line, there are no sticks, its pain free and we are back within minutes.. Except for today. As soon as they flushed the line I saw something leaking. I was hoping it was in the cap. Then they drew back blood. I saw it leak too. I asked if that was okay? I saw them look and then I saw her face. I knew it wasn't good. They said the outside line had a break it in. That there was no fixing it. To go to the ER. They went ahead and stuck Lynlee for the blood they needed today.

We came back to the room got Lynlee's meds for today and went to the ER. At first they decided to "fix" it. Even now I'm not sure if that was possible. There seems to be a lot of confusion if a line can be fixed. I finally said no to the idea when transplant said they didn't need the Picc line and when I found out they were going to "fix" it by holding her down, rewiring the Picc with no sedation. I know it's not supposed to hurt but she would be traumatized by that.  So we came back with no Picc. I'm still torn about losing it. I hope they can get her blood without sticking her to death. For almost 2 years we've had some sort of access. Either Mediport or Picc. So it's just different. But the dressing change that had to be done every 7 days was more traumatic than a stick to her. It was awful and it hurt! And not to mention the risk of infection that one has. 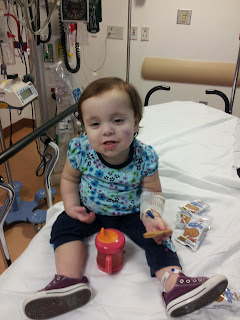 And the best news about being Picc free is we could bath.. We were two happy girls around 7:30 this evening..Her first bath in 6 weeks!!  And her feet finally smell good. (she's so going to kill me for this blog!) 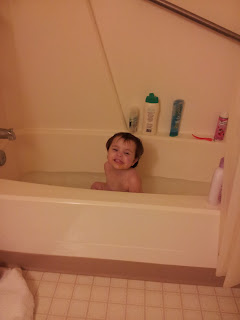 So I had finally got my mind in the right place when I looked up Lynlee's labs for today. Her potassium was higher than what it was before we started meds.. And her prograf lower than it's ever been. Ugh. I could feel the stress building up. So they called at like 5:15 and wanted to start her on another med. The pharmacy hospital was closed so Lynlee and I had to walk to Rite Aid and get it filled. I called Ryan while I was walking sobbing. I just want to go home so bad and I felt like this set us back. I feel like we can't get close enough. And I know its crazy to want to go home early. They told us to prepare for 3 months. It's only been 6 weeks. I know they will get it figured out. I also know that they can put a Picc back in if needed. It's just been a long day. And obviously I'm rambling.

But today wasn't all bad. We went to the playroom for an hour or more. Lynlee napped for like 15 minutes in the ER so an afternoon nap was out of her plans. So we played.. Here's miss thing posing. 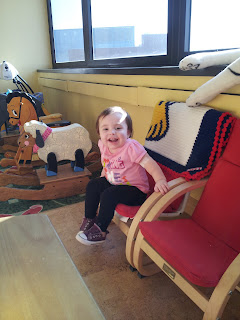 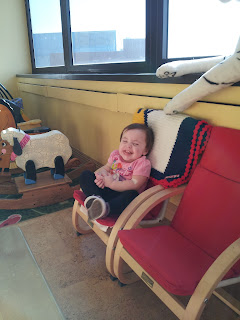 Ryan's mom is coming tomorrow to stay a few nights. I can't wait to have some more company..