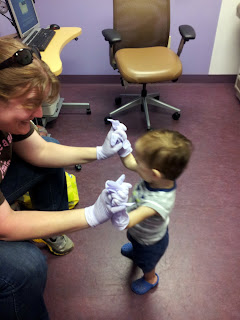 Lynlee and Aunt Heather waiting on the doctor
﻿

Yesterday we went to Pittsburgh to see the allergist. I told Ryan I would be thrilled just to get soy back into the diet but I wasn't getting my hopes up. I almost fell off the chair when the Doctor said we could have them all back.

It's true that Lynlee's Eosinophils (one of the white blood cells) are very elevated but it hasn't always been this way. When they looked at the graph it became elevated after May. Lynlee did have that bad fever and stomach virus late May. It made her liver levels go sky high and blew her EBV through the roof. So did the EBV raise the Eosinophils or did something like a parasite raise the Eosinophilis and caused the EBV to go up? Well we don't know the answer to that. I'll get back to you on that next week. They did lots of labs which will tell if it a parasite or something else? The Allergist was going to get some info, talk to other doctors including transplant and infectious disease and we will go from there.

She did say that the RAST panel could be a false high and unless Lynlee showed she has an allergy to a food there is no need to take it from her. She didn't even feel the need to do a skin test on her. Lynlee has never had an allergic reaction to any kind of food but said that could change any day. Just like it could with any of us. They did send us home with an Epipen just because she was a transplant child but said they wouldn't for any other. I think it helped her sleep better at night, because her eating peanuts is the least of my concern these days.

I think that sums it all up. We actually know nothing at this point except Lynlee was one happy girl at dinner last night, and going to the grocery store will be a little easier on me next time. I do know that I won't take not having allergies for granted and truly admire the people that have to live like that all their lives. It has to be so hard!