Is it really not even 9pm? This time change is killing me. I'm struggling to stay awake so I thought I'd ramble for a bit.

Lynlee's already in bed. She didn't nap today. And All day long I kept saying was well if the clocks hadn't been turned back it would be this time.. Wonder how long that will take for me to stop saying it?

I got to sleep by Ryan 4 times this last week. Two nights were because of the power outage and then he was off early on Friday and then off last night. I usually don't type about Ryan working since he's on midnight shift but everyone knows.. One car is gone so it's obvious. And  if someone would break in it's not like we don't have a huge dog that will kill you or if you would get by him I'll shoot you. No questions ask.

Okay now that we got that out of the way.. We have a super buys week coming up. Lynlee has labs in the morning. The first time in a month.. I'm praying they are good. We've NEVER EVER went a month for labs... Even before transplant her ammonia was so unstable we were biweekly for 2 years. So it's a big deal.

Both of our vehicles have recalls on them so they are getting fixed this week. Lynlee has her check up that was rescheduled from last week and I have job training on Wednesday and Thursday.. And possible job shadowing on Friday..

Everyone knows Lynlee loves Barney but lately she's been showing interest in Elmo.. And last night at Wal-Mart I found a Wiggles DVD super cheap and bought it.. She liked it, A LOT! but it is soo annoying. I wish I would have remembered this from when Lexi was a kid. There should be warning labels on the box!

Speaking of last night it was date night. Lynlee spent the night with Ryan's parents so we had dinner and breakfast alone today.. How odd.. It's always so nice and somewhat weird to be alone with Ryan for more than a few hours at a time. We don't get that often but it's so enjoyed when we do. 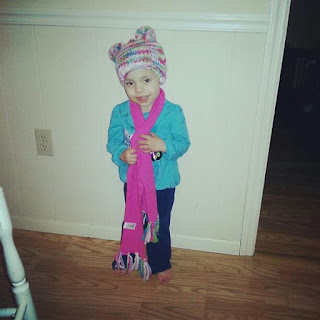 Lynlee is in a hat and scarf stage. Well really anything she can put on!
Okay.. Until next time. ﻿
﻿