I know that this post is long over due. It's been a while since I've blogged and usually I take a break when nothing is going on but this time wasn't the case. We've been busy. We've had more labs, more meds etc.. And I just couldn't find the time or more like I just didn't want to write about it.

Lynlee had labs two weeks ago (I think) and they were crazy high again. So we doubled the initial dose of steroids she was on. We went back last week and they were better. Not great but some better. So we lowered the dose some and go back next weeks. It's frustrating to say the least. I thought it my head it was going to be an easy quick fix but that hasn't been the case. Lynlee isn't herself. Some days are much better than others. She's often more irritable and more defiant than she would have ever been. It's such a hard call when to punish her and when to ignore it. I feel bad punishing her when she can't help it but some things is just not okay. So I guess we pick our battles wisely and every day is different.

But all things around here haven't been so bad. We've been busy in good fun ways too. I think we've had something going on every single weekend in July. And August is gearing up to be busy too. I thought I'd share some pictures with you from the weekend... 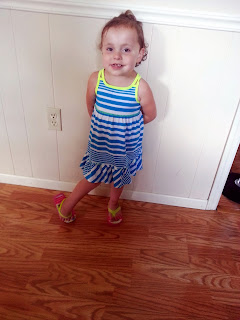 And yes she has gained some weight. Only 2 pounds in 2 months but her cheeks kill me. She is eating me out of house and home. No joke. It's not even 10am and she's had 2 waffles, a yogurt, and a smoothie. Plus I hear her in her snack cabinet as I type.. 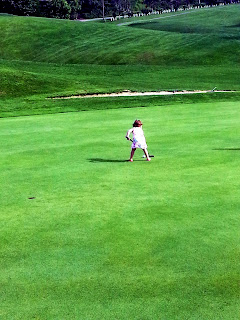 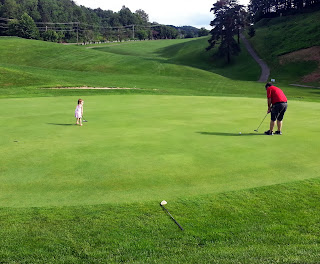 We spent the afternoon on Sunday at the golf course. Her and dad played 9 rounds. 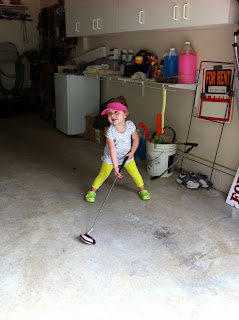 I'm thinking a girl on the PGA tour might make more money that a Dr so I'm okay with it :)
We are gearing up for another busy weekend here filled with Family Reunions.. Have a great weekend! ﻿